Let me start off by saying that I need another dog like I need a hole in the head. I have an English bulldog and a chihuahua. The English bulldog is obese and the chihuahua is the laziest animal alive. Neither one of them wants to go on walks or to the park. So recently while we were on vacation in Colorado, I saw all these people with their active, outdoorsy dogs and started thinking I would like to have a dog like that.

When we got back from Colorado, I started looking at rescue dogs on the internet and at local shelters. I am an “animal person” so when I learned that shelters are overrun with owner surrenders because of the economy, I was even more sure that I wanted to rescue a dog. I certainly don’t need another dog, but I can do my part in giving one more animal a home. The owner surrender thing breaks my heart. A dog goes from being a part of the family to lying on a concrete floor in the pound waiting to see whether he will be adopted or euthanized. It’s horrible, especially because the dogs have a limitied capacity to understand what’s going on. All they know is that they’re scared. I swear some of them know they’re going to die. You can see it in their eyes. 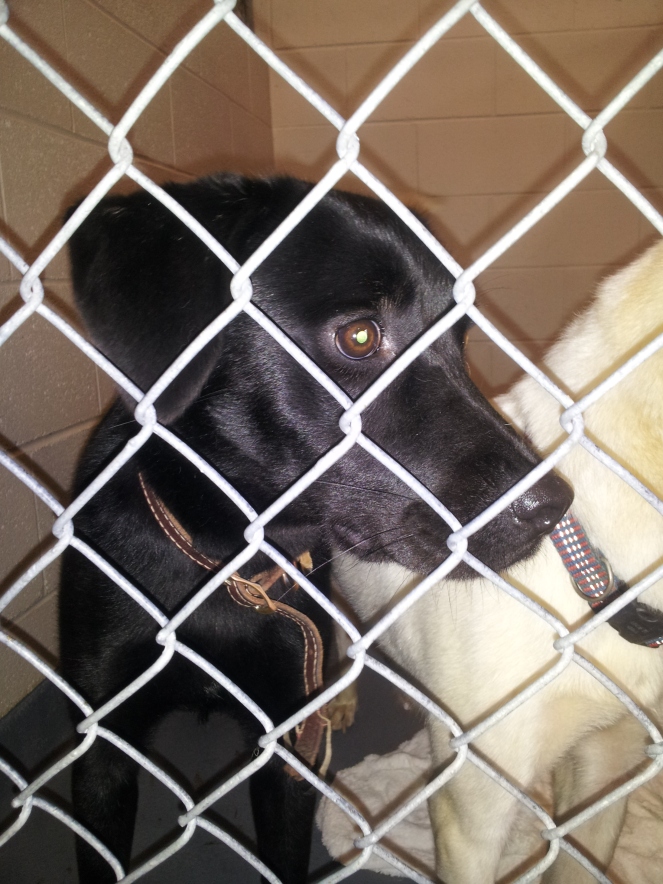 I found a dog online, a black lab/ bassett hound mix, that was at animal control in a neighboring county. This place  is what you would call a “high kill” shelter. Dogs come in and if they’re not adopted within a week, they’re euthanized. The shelter stays full all the time and there is never any spare room. So I went to check out this little lab mix whose picture on the website was not very clear. I was looking for an older dog and this little mix turned out to be a puppy. I knew I couldn’t take on a puppy with housetraining and chewing and all of that. But OMG, she was cute. She had stubby little bassett legs and a cute lab face and was all goofy and adorable. But still she was a puppy and I just couldn’t take on a puppy.

I did notice another lab mix who looked about 2 years old and was positively terrified. (See above picture.) She had a pretty lab face, but she was obviously worried sick. Her information card had TERRIFIED written in all caps.

I went up to the front to ask about her and was informed that she would be put to sleep the next day. You see, I had come on a Tuesday and I found out that they call it “Save a Life Tuesday” because they euthanize on Wednesday and this is the dogs’ last chance to get out. To make it worse, they were about to close so it was literally a do or die situation.

I had a stomach ache from trying to figure out what I should do. I knew nothing about this dog. I didn’t know how she was with other dogs or whether she liked kids. But I decided to bite the bullet, adopt her and pray for the best.

All I knew about her is that she had been tied in someone’s yard with her sister in 100 degree heat with no food or water. Someone called animal control to complain and when an officer went out, their owner said, “Just take them. I don’t feel like dealing with them anymore.” That is how she came to be at animal control.

Her sister was a yellow lab mix, almost identical to her. They wanted me to take them both, but I couldn’t.

When I got her home, she was terrified of my husband and he wasn’t too thrilled to see her either. She hid under the dining room table while I was at work and wouldn’t have anything to do with my husband. Luckily, she liked my kids right from the start.

After a couple days she warmed up to the hubs and fit right in with our family. I am happy to report that she is a GREAT dog. She poops outside, doesn’t chew the furniture, loves going to the park, sits on the kids’ beds for storytime and is an all-around awesome family dog.

After much deliberation, we named her Heidi. I’ve always liked the name and someday I want to read the book to my daughter.

I’m so happy that I happened to walk into Animal Control on “Save a Life Tuesday.” Heidi got rescued and I got a new best friend.