This week’s $5 donation was made to Cambodian Children’s Fund (CCF). If there were one more organization I could support monthly, it would be this one. Their founder, Scott Neeson, is a pretty spectacular guy. He’s Australian and he moved to L.A. to pursue a career in Hollywood. He became President of 20th Century Fox movie studios and later worked as a head honcho at Sony. Right about the time he was transitioning to Sony, he took a trip to Southeast Asia and while in Cambodia he visited the Steung Meanchey dump outside of the capitol city of Phnom Penh.

Steung Meanchey is a giant landfill that has closed now, but when it was operating it was home to a large amount of families that picked trash for a living. They looked for metal to recycle and anything they could use or sell. Imagine literal mountains of trash, some of it burning, and imagine small, barefoot children picking through it with their bare hands. Kids were forced to pick through medical waste, used needles and other hazardous materials looking for anything of value. They typically worked from sun up to sun down, with one meal a day. It was a horrible life for anyone, especially children.

Scott Neeson saw all of this when he visited the dump. Neeson is my favorite kind of person, the kind I want to be. He saw a need and he allowed it to DISRUPT his life. He went back to L.A., sold his house, his boat and his cars, laid out the plans for Cambdian Children’s Fund and moved to Cambodia. Goodbye jet set, hello trash dump. He started by pulling 45 kids off the dump and putting them in school. Today he helps 10 times that amount. He takes in kids of all ages and gives them the chance at an education and a better life. He works with families who desperately want to take care of their children, but are drowning in poverty. It’s worthy work and it’s necessary work. He could have turned away from the dump and gone back to the beautiful life in Holly wood. That would have been the easy thing to do. But he didn’t. I so admire that.

I am friends with CCF on facebook and they regularly update with pictures of the kids. Neeson does a lot of before and after pictures. He shows the kids when they first come to CCF- dirty, skinny, scared, hungry- and then a few months later with clean clothes, full tummies and big smiles. Here is one of my favorites: 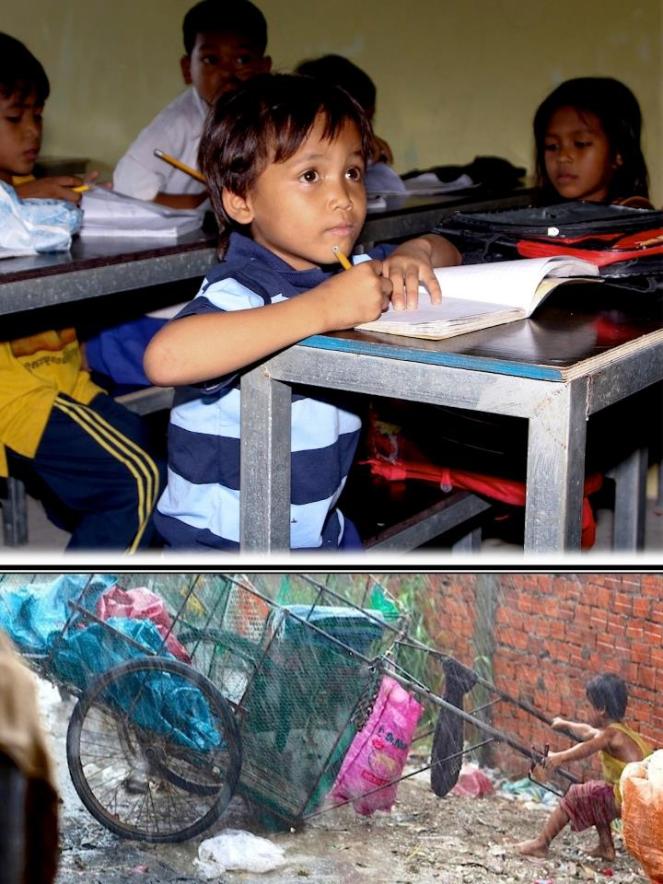 This boy’s name is Ratha. The bottom picture was taken in July of this year when Ratha was working in the streets. Now he’s going to school. Look at his little face! You can tell he’s trying so hard! It just makes my soul happy. Every kid should have a happy childhood and get to go to school. I am grateful to Scott Neeson and CCF for making that a reality in one more life.