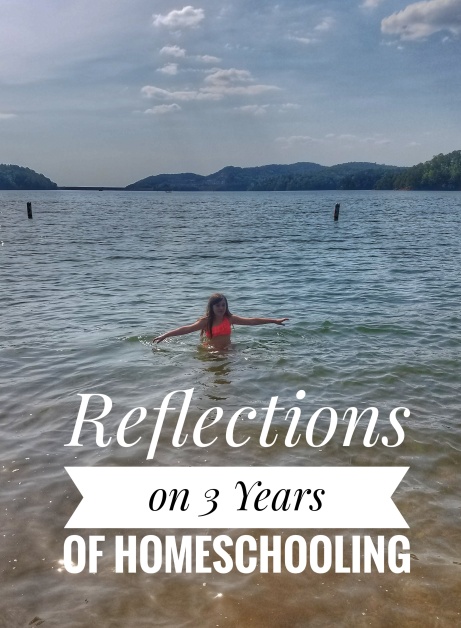 I pulled my daughter out of public school at Christmas of her second grade year. I remember that day very clearly. I was both terrified and defiant as I walked into her elementary school office that day to fill out the paperwork. I knew in my gut that this was something I had to do for my kid, but that didn’t make me any more brave. I questioned whether I could give her the best kind of education. Could I do as good of a job as the school? I wasn’t a teacher and I had no background in education or child development. All I had was the knowledge that my daughter was supremely unhappy in public school, and a desire to raise a child who didn’t hate her everyday existence. Life is too short to be miserable, especially when you’re 7.

I chose a free online curriculum called Easy Peasy. Before I pulled her from public school I went through the curriculum and thought I would need to supplement it by adding additional projects and activities. I had a whole list of science experiments, history projects, and reading assignments that I thought she would need to do. I was paranoid about not doing enough, about falling behind. I was bound and determined that she would cover just as much, if not more, than she would have at public school. As it turns out, Easy Peasy has been more than enough work for her, I didn’t need any of that other stuff, and I radically shifted my perspective about what constitutes a good education.

I was consumed with an idea of education that meant checking boxes off a list, showing that you’ve done a certain activity on a certain day, or scoring above a certain number on a standardized test. I quickly learned not to measure her educational experience by which boxes we had checked. I do believe that there needs to be a curriculum and some order to the learning, and Easy Peasy is great for that. But the best kind of education allows for some free styling. Homeschool has allowed us to go down the proverbial rabbit hole. For example, Elle was reading one of the Little House on the Prairie books, the one about Laura’s grandmother’s life in Scotland. That led to Elle asking questions about Scotland and researching the country totally on her own, using the research tools she learned from homeschool. She learned about lochs, tartans, kilts and a certain elusive monster. It wasn’t in the curriculum, but it was valuable and worth doing.

When I began homeschooling, my biggest fear was that I wouldn’t be able to teach her as much as she learned at school because I wasn’t a trained educator. I shouldn’t have worried. I feel that she is receiving a far superior education to my son who is still in public school (because he loves it). The difference is in efficiency. My daughter turns on the computer and gets to work. She consults me when she needs help, but much of the time she works independently. When she does need my help, she has my full attention. She isn’t in a classroom with 20 other kids who are all vying for attention. She essentially has a private tutor. It’s a very efficient way to learn. She can spend more time on subjects she struggles with and less time on things she already understands. Again, there’s no timetable we have to adhere to and no other students who she has to keep up with or slow down for, so she’s free to work at her own pace. She covers an impressive amount of material in 3 to 4 hours a day.

Half the time my son can’t tell me one thing he learned at school, not because the teacher isn’t doing a good job, but because there’s a lot going on in a classroom with 20 kids. There are lots of distractions- bad behavior that has to be corrected, interruptions, being forced to move to writing just as a kid is beginning to understand his math, stopping for lunch and recess, spending time waiting in line or waiting for 20 kids to wash their hands, only having a short amount of time to work on a skill because the curriculum is so lengthy the teacher can barely cover it all, and the list goes on. Homeschool is simply a more efficient system. It’s a faster way of transmitting information and the information is better absorbed because there aren’t so many distractions.

The best part for me has been the way homeschooling fosters a love of learning and integrates learning into everyday life. In regular school, learning is something that happens between the hours of 8 and 2, and is confined to the school building. Once most kids come home from regular school, they want to play. They don’t want to read or do homework or do research, even if the topic is something they’re interested in, because the regular school model separates play and learning. At 2:30 p.m., the kids feel that they have already learned. They’ve checked that box for the day. Regular school puts learning into a time slot, not to be confused with free time.

In homeschool, learning is woven into our day. Sometimes we do very little formal work. Instead we clean the house or weed the garden or go on a hike. All of that is still considered homeschool. My daughter is learning life skills as well as math and grammar. Homeschool is a lifestyle of learning, one that doesn’t compartmentalize. Simplifying fractions with a pen and paper is math, but baking a cake and measuring a half cup of sugar is also math. Some types of learning are more fun, but it’s all learning. I see lots of regular schoolers who have a bad attitude about learning; they view it as a chore. Not so much with the homeschoolers; for them, learning is just another part of the day. You don’t have to go anywhere special to do it and it isn’t confined to the hours between 8 and 2. If we’re trying to create lifelong learners, homeschool seems like a better approach.

I could write a novel about how much I love homeschool. It is the very best decision I ever made for my daughter, one that I have not regretted for a single minute. Even in times when it’s difficult, mostly when we’re doing math, I’m convinced that it was the right choice for us. Struggling with math at home with her mom at the kitchen table is superior to struggling with math alone at school because she’s too embarrassed to ask for help. Homeschool isn’t for everyone, but it’s definitely working for my kid.

It’s wildflower season!
Pretty ride this morning and Baron is now able to get his feet wet without going into orbit! #progress
Windy but beautiful this morning
There’s plenty of room around the feeder but they all like to be together.
I have to brag on my horse for a sec. When we moved here, he was a handful at the beach, just very nervous about the new environment and not exactly relaxing to ride. After 6 months here, he has calmed down tremendously! I know he likes our beach trips because he hops right in the trailer. When we’re on the beach and we get near the turnoff to go back to the trailer, he turns around and wants more beach time. Today we found nice hard sand and we trotted back and forth along the beach over and over. Each time he would turn and trot out again. His body is feeling good, his feet are improving, and he wants to stretch his legs! For the first time, I’ve been able to completely relax and take in the scenery. We even saw dolphins today! I’ve considered whether I should retire him because he’s an old racehorse with arthritis, but lately he’s been making it clear that he’s got some more years to give as a riding horse!
Kayak trip with Bitsy and my new sun hat. My story has some cool nature stuff I found.
Loading Comments...
Comment
×
%d bloggers like this:
%d bloggers like this: