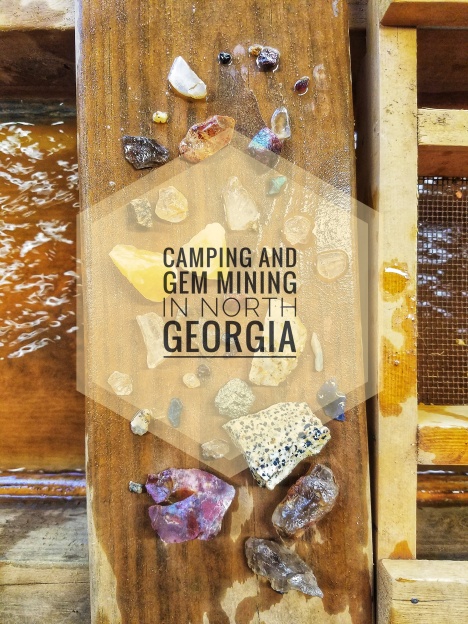 My son had a short break from school, so we headed north for a one night camping trip to Toccoa Valley Campground in Blue Ridge, Georgia, one of my favorite towns in the whole state. 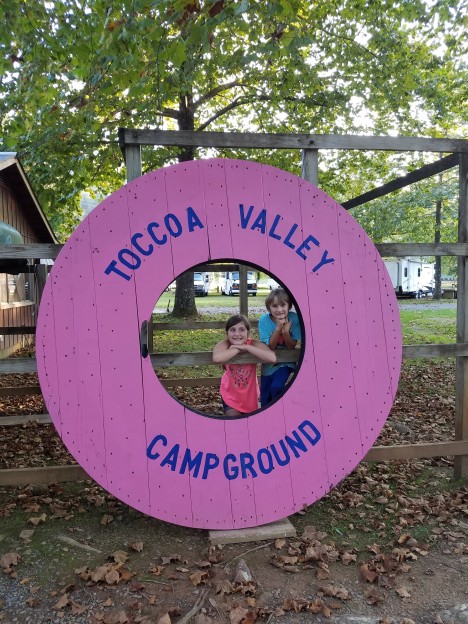 I told the kids they could each pick one activity to do in the mountains, so in addition to camping we had two extra adventures- visiting the Swinging Bridge and gem mining.

Toccoa Valley Campground is a small family run campground with both tent and RV sites. There is a strict no alcohol policy, which is a bummer for me because I do enjoy a cocktail around the campfire. The campsites are located on the edge of the Toccoa river. 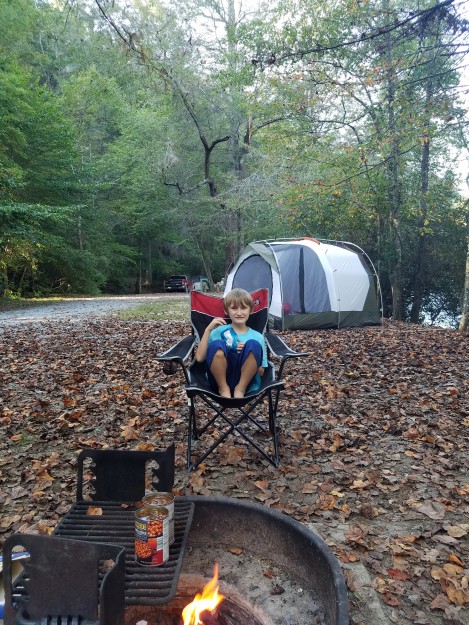 When we were there, the river was moving fast and wasn’t safe for the kids to play in. They could put their feet in near the edge, but it wasn’t safe for swimming. It looks glassy in the picture, but the current is swift.

The river is beautiful though, and the sound of the little rapids helped us drift off to sleep. The campsites are not very private at all, which is also a bummer for me because I like seclusion, but the upside is that I felt very safe camping with just me and the kids. The sound of the flowing river drowns out the other campers as well. 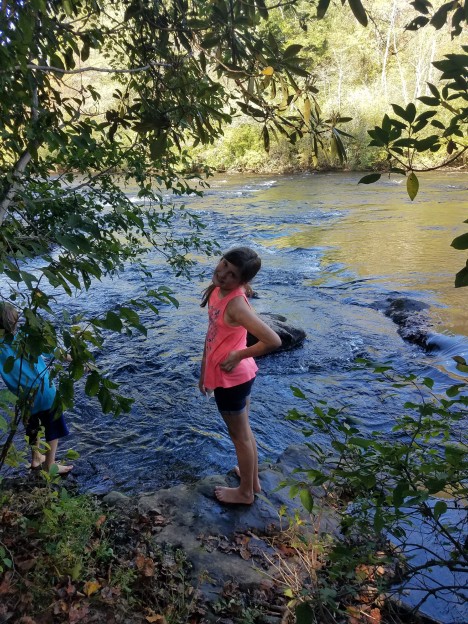 The next morning we packed up and headed for the Toccoa River Swinging Bridge. Somehow I managed to delete those photos off my phone, other than the pic of the sign. 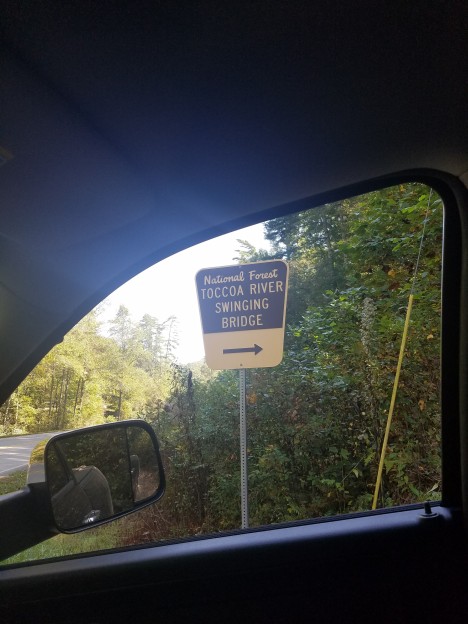 The drive up to the bridge is on a gravel forest service road, the kind that crisscrosses the north Georgia mountains and always seems to lead somewhere with an incredible view. But first you have to endure the road. It’s bumpy and not something I would do in a car with a low bottom. We were totally fine in my truck. It isn’t treacherous, just very bumpy and a bit long. Once you arrive at a little informal parking lot, you get out and walk to the bridge. I think the Toccoa River is absolutely stunning, and the view from the bridge is worth the drive. A very short hike takes you to the bridge.

The bridge gets its name from its suspension design. It hangs from cables and when you walk on it, it sways slightly. My son had a blast grabbing the rails and trying to get it really swinging. We were the only ones there, so I let him go for it.

Here are some pics from Google… 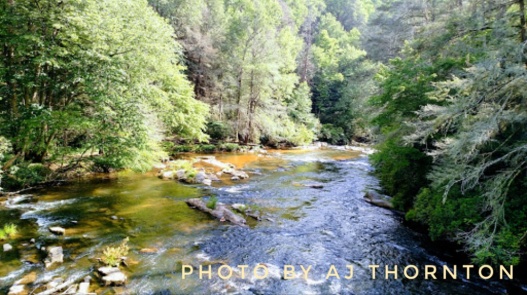 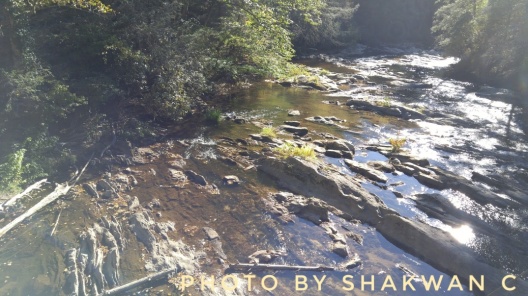 Next up was gem mining. There are gem mining spots all over the place in north Georgia but we chose the Lilly Pad Village because of its close proximity to our campground. They also offer miniature golf, picnic tables, and a stocked pond for fishing. You can rent fishing equipment from them, no need to bring your own.

My son said he didn’t want to do gem mining, so it was just my daughter. They gave her a bucket full of sand and gems, a sifting pan, and a laminated sheet with all the different gems she might find so she would know what to look for. 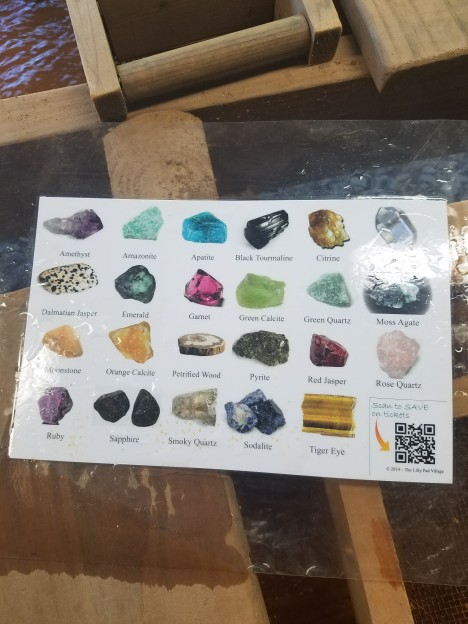 She scooped some sand into her sifter and then lowered it into the flowing water. 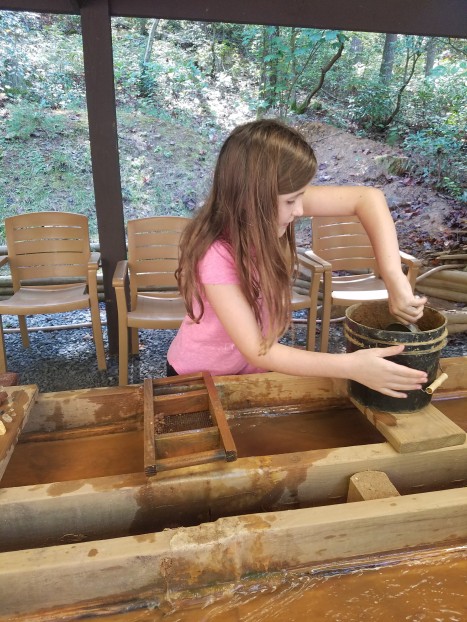 The sand flowed out and the gems stayed in the sifter, ready to be plucked out.

We were the only ones there at the time, so the owner helped us identify gems and we had a nice conversation about living in such a beautiful area. The owner was very knowledgeable about both the gems and the area. I would definitely recommend a stop here if you’re in the area!

Altogether this was a fantastic, quick little trip. We only stayed one night and did two activities, but it was an easy and cheap mini-vacation!