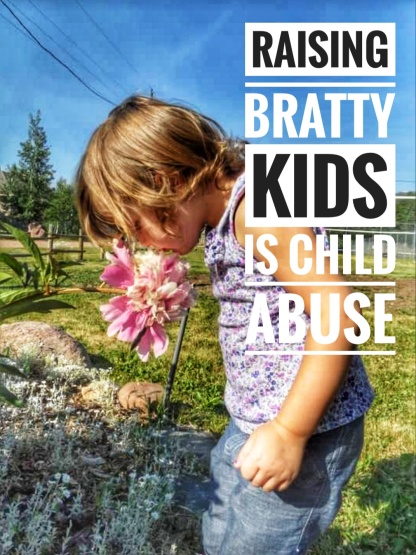 The other day I was unfortunate enough to be at the grocery store at the same time as a family with two very badly behaved children. I wouldn’t describe myself as a kid person, even though I have two of them. It’s not that I dislike children; I don’t. Kids can be delightful. I simply dislike how certain other people parent their children.

This particular family got my attention almost as soon as I walked through the doors. It’s hot here in Atlanta, and as the automatic doors slid open and I was hit by the blast of air conditioning, normally I would breathe a sigh of relief. But no, not that day, because as soon as I walked in I could hear them- the bratty kids.

Everyone could hear them because they were LOUD. There were only two of them, but they were screeching. Nothing grates on my nerves like a kid screeching. Have you ever heard a parrot really get going and wonder how an animal that small can make so much noise? It was like that, and it reverberated off the cold, hard floors of the Aldi so that all of the other shoppers were turning and looking to see what all the fuss was about.

As I went through the store, the screeching would pause momentarily and then start up again when something upset the children. But it all came to a high-pitched head when the bratty kids got to the checkout line. They were behind me in line, and they were unhappy. Very, very unhappy. These were not tiny kids either. I’m guessing they were 4 and 6 years old, so plenty old enough to display some self-control if anybody had bothered to teach it to them.

I’m not sure exactly what set the kid off, but one of them went into full temper tantrum mode, to the point that every single person in line was either gaping at the kid with mouth open or trying to look away politely while making eye contact with other shoppers as if to say, “Can you believe how that kid is acting?” I looked around because I wondered if everyone else was as horrified as me and, sure enough, they were.

The cashier and I were totally on the same page. We had a quiet discussion about how there is no way in hell we would let our kids act like that, that it would never even occur to our children to act like that. The kid calmed down momentarily, only to be set off again moments later to resume screeching.

The mom tried various ways of placating the child, all completely ineffective. The kid eventually got bored with screeching and quit because he decided to, not because the parent did anything even remotely disciplinary. She started by offering candy in exchange for silence, and then switched to asking, “Do you need a spanking?” Several customers quietly answered, “Yep!” But of course she didn’t give the kid a spanking, and probably never has, and that’s why he’s such a little tyrant.

The bratty kids were relatively quiet for a couple minutes in the checkout line and then just as they were loading up their cart, one of them started up again. This time I was close enough to hear what did it. At Aldi, in the checkout line, you get the cart that belonged to the person in front of you and you leave yours with the cashier who then gives it to the person behind you. The cart switch was entirely unacceptable to Bratty Child. He wanted HIS cart, the same one he walked in with, even though they are identical and that is a completely ridiculous thing to be upset about even if you are 4 years old. This time there was no calming him down. He screeched and screeched, and flailed, and threw himself around, and hit his parents, and made the shopping experience a total nightmare for everyone else in the store, until his parents dragged him out.

You may be thinking, “Well, the kid may have some sensory processing disorder and that’s why he was acting like that, and you’re just a big meanie who doesn’t like kids.” It’s true that the kids may have been on the spectrum, but I didn’t get that feeling. When they were temporarily happy, they seemed like normal children. We should make allowances for kids with processing disorders, but I don’t think that was the case here. If the kid does have a disorder, then his mom needs some help in managing it because it turned into a very stressful, upsetting situation for the child.

As for being a big meanie, that’s possibly true, but I think I’m just old fashioned. I think people should teach their kids to be respectful and considerate of other people in public spaces, because nobody wants to hear a kid wailing while they’re trying to shop. It’s mind blowing how fast a rude kid can ruin an experience for everyone else who is forced to be near him. I’m not talking about a little baby crying on a plane or a child crying because she got hurt. I’m talking about being in a restaurant with a kid whining so loud or being so hyper that he’s grating on the nerves of everyone who is paying good money for a pleasant, relaxing dining experience. I was taught to look around and be considerate of other people, and I feel like many parents don’t teach that anymore. They wrongly assume that everyone else also thinks their kid is adorable. News flash- no one thinks a bratty kid is cute.

There’s a big difference between a child who is genuinely excited and is having trouble containing his energy and a child who is rude, defiant and aggressive. Shortly after the bratty kid experience I was in the same Aldi and there was a mom with 3 young boys. They must have been shopping for a pool party or a birthday party, and they were excited. She said “yes” to some of their requests and “no” to others, and they never questioned the no. They were jumping around and talking pretty loudly but, when their mom reminded them to calm down, they did! Other shoppers were smiling at them because they were cute kids and they were excited about life. That’s one of the best things kids do for us; they remind us to be joyful. This mom clearly had built some discipline into her family life because she was able to change her kids’ behavior with a simple, quiet reminder. No temper tantrum, no meltdown, no huge scene in public.

Honestly, I don’t believe there is any such thing as a bratty kid, only ineffective parents. And you know who suffers the most from ineffective parenting? THE CHILD. Imagine having a job with zero structure, where the rules change every day, every minute even. You’re late one day and your boss doesn’t say a word. You’re late the next day and your boss blows up at you. Not knowing what to expect is extremely stressful, especially for a child. When a kid isn’t given guidelines about his behavior and when punishment or consequences are doled out in a way that seems arbitrary and capricious, the kid is in a constant state of stress. One minute his mom is offering him candy and the next she’s threatening to spank him. Which is it going to be? Is he going to get rewarded with candy for having a meltdown, or is his mom going to haul off and whack him? That is confusing for a kid.

It’s also exhausting for the child. Have you ever had a big fight with your spouse and afterward you felt not only emotionally drained, but physically tired as well? A kid that hasn’t been taught how to deal with his emotions ends up having meltdowns about very minor things, like having to change carts. The child spends emotional energy on something completely meaningless and is left feeling exhausted afterward, all because no one bothered to teach him how to cope.

That’s no way to live. The parents can’t enjoy their lives and the kids certainly can’t enjoy theirs. The older my kids get, the more I enjoy them. I’m not qualified to give parenting advice, but I will say that raising my kids with structure and high expectations about their conduct has so far turned them into fun people to be around (check back with me when they’re teenagers). I genuinely enjoy them as individuals, and I’m able to take them in public without worrying that it’s going to be some kind of massive train wreck.

There’s nothing worse than a bratty kid, but the one who suffers the most isn’t those of us forced to be around him. It’s the kid.

Kayak trip with Bitsy and my new sun hat. My story has some cool nature stuff I found.
The Pamlico Sound did not disappoint today.
Rusty has a handsome new pasture mare and he is SO jealous if I pet the big horse. The new guy is the sweetest, most well behaved stallion. He’s so chill compared to Rusty’s huge personality! 💛💛
The most fun day exploring! I’m about to start doing kayak tours for @slashcreekoutfitters and I needed to go figure out my route. I found the perfect spot for people to get out of the kayak and explore. Check out my story for a little mini tour and some nature sightings!
Quick hike after my long day at work. When I feel crappy about something, he cheers me up!
Lunch break treasure hunt. Check out the hot pink coral. I love it.
Loading Comments...
Comment
×
<span>%d</span> bloggers like this:
<span>%d</span> bloggers like this: