I didn’t call this post “How to Raise Independent Children” because I’m not done raising mine and I don’t know how they’ll turn out. I don’t know if anything I’m doing now is going to work, but I’m sure as hell trying to raise independent kids.

I work at a doctor’s office and I can’t tell you how often I have phone calls that go like this:

“Hi, I’d like to make an appointment for my son.”

I can’t tell you how many times a young person in his late twenties or even thirties will walk up and pay with his mom’s credit card. It seems more common for men to still be mooching off of mama, although it does happen with women as well.

It’s hard for me to wrap my head around those situations because my parents gave me less and less help as I got older. By the time I graduated from college, it was up to me to figure it out. I could call home and ask for advice, but I would have been embarrassed to take money from my parents once I started working. I went to college at 17 in a state halfway across the country and by the time I was in my mid-twenties, I handled my own life. There were times they helped me out in emergencies, but nobody was calling and making doctor’s appointments for me. I think this is directly linked to my parents making me work.

My parents are part of the generation that was ashamed to take a handout, that viewed work as noble and laziness as a cardinal sin. I have watched my parents work my entire life. My dad retired last year from 40 years of commercial fishing, and he still gets up and goes fishing just about every single day.

My mom owned a children’s clothing store but she also worked odd jobs to make ends meet, everything from delivering flowers for the local florist to making boxes at the fish house where all the commercial fishermen sold their fish. My parents were never too proud or too good for hard work.

Because they worked, I knew I was expected to work as well. My basic needs were met by my parents, but if I wanted extra stuff, that was up to me. I got my first job answering phones at a real estate office when I was 14. Mostly we did vacation home rentals. I worked there all through high school and saved enough money to help pay for mission trips to Thailand and Peru. I did some fundraising, and people in my tiny town were very generous, but it was understood in my home that if I was asking other people for money, I would be putting up my own as well. I was 15 when I went to Thailand for a month, and it felt good to know that my job had helped make it possible.

Work helped me become independent. I had to learn how to function in a professional setting, how to do a job interview, how to speak to people older than me, how to show up on time, and in my case how to get yelled at by an angry Yankee whose rental cottage was not as close to the beach as he had expected based on the picture in the brochure. Work teaches kids how to function in the adult world and eases the transition from dependent child to independent adult.

So, how does this relate to my own kids? Well, I can guarantee you that they’re getting jobs in high school. There won’t be any loafing around the house and asking me for money or zoning out in front of video games for hours at a time. If you live in my house, you’re getting up and going to work.

Right now, my kids are 8 and 9 years old and I’m already starting in on them about being productive humans and not slugs. It starts with little things. My son always wants me to get him things- a glass of water or a snack. My answer is usually, “Get it yourself.” If he can’t reach a cup in the cabinet, I’ll hand him a cup and he can fill it up. He’s learning how to make simple things like toast or a sandwich. He’s responsible for cleaning his own room and bringing his laundry downstairs to be washed. 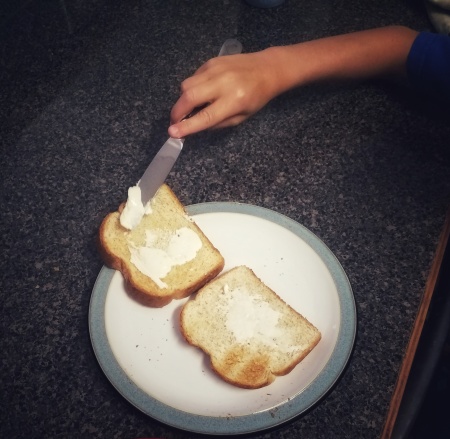 It would be easier for me to do some of these things myself. It’s messier when he makes his own sandwich and I have to stand there and supervise. I could do it faster, but then he would miss out on the experience. He needs that experience. If he can make his own toast, he can do other, cooler stuff too.

I refuse to be the middle man for my kids when they want something. If we’re out to eat and they need something from the waitress, they can ask for it, not me. They need to learn to be assertive and to speak to adults. I see parents speaking for their kids all the time- asking for things, ordering for them, answering questions that were directed to the child. Are they going to their job interviews too? These days it wouldn’t surprise me.

Raising independent children requires the parent to step back and let the child fail. I think this is the hardest part for some of us. I think some of us let our egos get wrapped up in our children’s accomplishments. It’s fun to brag about how smart and talented our kids are, less fun when the whole neighborhood knows that your kid strikes out. Every. Single. Time.

Protecting our kids from failure or only putting them in situations where they are assured success is probably the worst thing we can do for them. A false sense of accomplishment is not an accomplishment at all. If your kid wins the science fair on a project you created, your kid knows HE didn’t really win. YOU did. It’s not the same and the kid knows it. Remember your 2 year old shrieking that he can put on his own shoes? Kids want to be independent. Parents who are wrapped up in their kids’ lives in an unhealthy way steal that opportunity from them.

We had a bird nest in a tree just off our back porch this spring. We watched the robins come and go with food for the babies, and eventually we watched the mama robin push the fledglings out of the nest for some time on the ground. Mother birds do this to test out their flying and foraging skills. My daughter wanted to “rescue” the babies, but I explained that they had to be out of the nest to learn how to fly and find their own food. When they’re on the ground, they’re vulnerable. They could be eaten by a snake, a hawk, or a neighborhood cat, or stepped on by my big dog. There are risks associated with growing up. But it has to be done so there’s not a full grown robin squawking in the nest for his mama to bring him a worm.

Parenting is terrifying and it can be heart-breaking as well. It sucks to watch our children struggle, but the struggle is part of the journey, the thing that turns us from mama’s boys into men, or shy, insecure girls into confident women. All I know how to do is emulate the good things my parents did for me- make me work, let me speak for myself, and allow me the space to fail. These are the things I can do for my kids. That way when they’re 35, they can make their own doctor’s appointments!