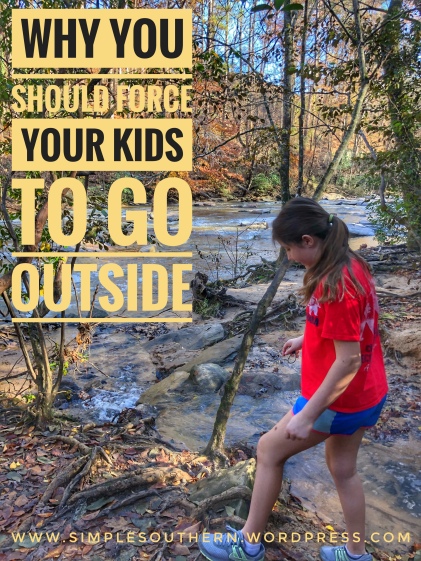 Getting outside is one of the most healing and restorative acts you can do for yourself. It’s good for your body to get moving, and it’s good for your soul to be out among the trees and wildlife. That’s not just sentiment; there’s science to back it up. See The Nature Fix: Why Nature Makes Us Happier, Healthier, and More Creative

Nature has the same positive effect on kids, and there’s science on that too. Check out Last Child in the Woods: Saving Our Children From Nature-Deficit Disorder

Kids need nature, but if kids aren’t brought outside and made to stay there for a little while, a lot of them will drift back to their climate controlled residences and pick up the myriad blinking and blooping devices to which they are addicted. I want to instill in my children a love of the outdoors, but it’s hard to do when I’m competing for their attention with Fortnite and Pokémon. (My children are actually not allowed to play Fortnite.)

There are terrifying statistics about children and nature. I read that the average American prisoner gets more outside time than the average American school-aged child. More and more people live in suburbs, next to other houses and planned playground areas, instead of bordering wild, wooded spaces.

I grew up playing in salt marshes and coastal pine forests, because the island I grew up on is a national seashore. My kids don’t have daily access to those same kinds of wild places, because we live in the suburbs and every bit of raw land is owned and spoken for and littered with no trespassing signs. If I want to get my kids outside, we have to go to a state park or national forest, and it takes more effort than some suburban families are willing to put forth, probably because they don’t understand the value of getting kids out into these places.

You might think from the pretty pictures on my blog that my children are smaller, less articulate versions of John Muir that awake every day begging me to take them into the woods to gather berries and watch birds. You would be wrong. They don’t wake up and tell me that the mountains are calling and they must go. I force my children to go outside in all kinds of weather – the hot, buggy, miserable Georgia summer and the damp cold of our winter- and they complain like they are on a death march. “My legs hurt. Did you bring any snacks? Hunter forgot his water and he’s not drinking out of mine!”

Why do I bother, you might ask. Why not stay in the ‘burbs and be content with the playground? Because I read the science on human need for nature and I believe it, and because I have seen its positive, restorative effect in my own life and I want to give my children the gift of replenishment.

We live in a society where our children are inundated with stimuli. We constantly see advertisements, apps on our phones , computer games, video games- things that are designed by marketing departments to capture our attention and make us addicted to them. The more time we spend in front of these various games and apps, the more advertisements we see and the more money they make. It is very hard for trees and rocks and rivers to compete with content on a screen that is specifically designed to make us addicted to it. The outdoors is not fun in the same way that a video game is fun, because it does different things to our brain. Trees and rocks and rivers were not made to addict us. They were made to calm and soothe and heal us. But they can’t come to us; we have to go to them.

How do we counteract the influence of our digital culture and cultivate in our children a love of the outdoors? First, we have to get out there. We have to leave behind the pre-fabricated playground equipment resting on a concrete slab that is two minutes from our house and drive an hour and a half to the national forest so that our kids can walk on the trail and play in the creek.

We have to let them get dirty too. They have to feel the mud squish between their fingers and pick up the stick and throw it in the creek and touch the slug in the grass. We have to let them take off their shoes and rip their pants and get completely grubby and disgusting. That is FUN for a kid, possibly more fun than PlayStation. 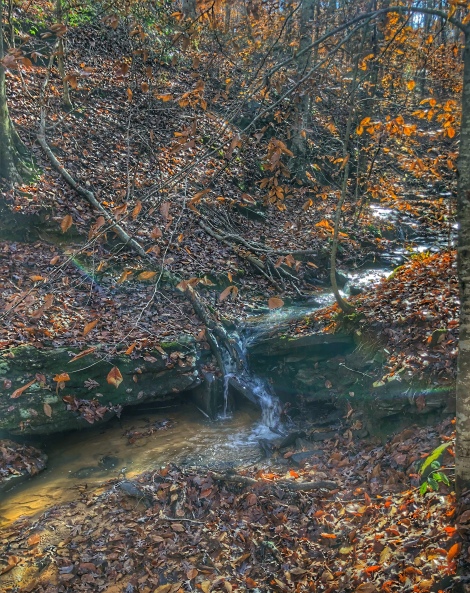 We can’t micromanage their play. We have to turn them loose in the outdoors and let them come up with their own games. Modern parents have a tendency to dictate every single detail of our kids’ lives, from what they wear to how they play. We couldn’t possibly let our child wear his favorite outfit to school (ripped jeans and a stained t-shirt)! What will the teachers think?! As an aside, my mom did let me wear my favorite outfit to school. It was red leggings and a sleeveless shirt with bullets crossing the front, like I was some kind of tiny Sandinista. I think I’m better for it.

I think many parents are so concerned with appearances, so afraid of being judged by other parents, that they squelch their children’s creative impulses. Can we at least let them play how they want? Can we plop them into a forest and let them explore without an adult dominating the activity? No instructions, no step by step tasks, no adult hovering over them to make sure it’s perfect, just a bunch of kids letting their legs and their imaginations run wild.

We have to take them to beautiful places, places that inspire awe in young and old alike. Anyone can stand at the base of a waterfall, listen to the water bounce and gurgle, watch it splash and tumble, and know that standing at the base of a waterfall is a worthy activity to undertake. Once they’re there, they’ll get it. The waterfall will work its magic if you just strap your kids in the car and deliver them to the waterfall. The same goes for the night sky on a mountaintop, the edge of a canyon, a tree so big they can’t wrap their arms around it. But you must take them to the mountaintop, the canyon and the tree. Just get them there. Pack the snacks, don’t forget the water bottle, and let nature do the rest.

One thought on “Why You Should Force Your Kids to Go Outside, Even if They Whine…”

Early morning beach ride through the haze. Always grateful to live and ride here.
Tell me you’re from Hatteras without telling me you’re from Hatteras- one barefoot, one in crocs and one in fishing boots. We’re not the poster children for Pony Club.
I moved to the beach and still spend most of my time at the barn 🤣 But I ride on the beach so it’s all good!
I suck at Instagram. I post for a while, then fall off the wagon. The horses are great, the kayak tours are fun and life is good on the sandbar.
It was a gorgeous day on the sandbar! I rode my ottb in a halter, on the beach, on Memorial Day and he was CHILL. I love it. You can’t ask for more!
We haven’t forgotten the reason for this long weekend!
Loading Comments...
%d bloggers like this:
%d bloggers like this: