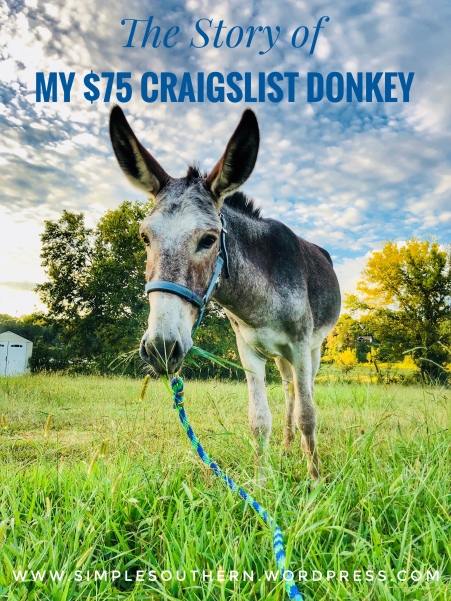 My daughter had been begging me for a donkey. She has a thing for donks like I have a thing for horses. I wasn’t sure if she would stay interested though, so I was hesitant. I mentioned it to my barn owner and he said he wouldn’t mind having a donkey in the pasture with his cows, since they’re good guard animals and we have coyotes in our area. In the spring when the calves are born, he always worries about the calves getting attacked by coyotes. We agreed to share a donkey. He wouldn’t charge me board and I would pay the donkey’s feed and vet bills. If my daughter lost interest, the donkey would still have a home and a job.

The search was on for a donkey. Have you ever noticed that when you’re looking for something specific, there are none to be found? I see donkeys for free or cheap on Facebook all the time. I decide I want a donkey and all of a sudden there are no donkeys less than $500. We looked for about a month and finally found one on Craigslist in Alabama. I emailed the people and asked about him, telling them he would be a pet for my daughter. They said he was really friendly and would enjoy being a pet. He had lived with cows and goats his whole life and was used to being a guard animal. They only wanted $75 for him. He wasn’t gelded, but for $75 I could have him gelded myself without breaking the bank. He sounded like a good fit so off we went to Alabama.

Turns out he was friendly but had never been handled AT ALL. He had never even seen a halter until I showed up with one. They had parked a horse trailer in the field and lured him in with food, then driven it out. They wanted me to back my trailer up to theirs and transfer him from one trailer to another since he didn’t know how to lead.

I was very skeptical but my daughter was convinced that this was the donkey for us, so I agreed to at least try and halter him and get him in our trailer. Horsemanship challenge accepted!

We pulled my trailer up to theirs, and put 2×4’s down to make a bridge between the two. The open doors formed a chute. I got in with him and attempted to put the halter on. It was actually really easy. He was fine with me petting him and he was curious about everything. I had him haltered in just a couple minutes and then I practiced leading him around inside the stock trailer. He caught on quickly and then we worked on crossing the bridge to my trailer. They were thinking he could just ride in there loose, but my trailer was open so he had to be tied. He could have tried to jump out if he hadn’t been tied.

He was really chill about everything, and the whole process from haltering to loading took about 30 minutes. Even though he was unhandled, he was sweet and curious and that was all the raw material I needed. I was confident that we could turn him into a responsible equine citizen.

Since we’ve had him home, my daughter has been very good about feeding and caring for him every day. She’s learning some training basics and she taught him how to lead. We had him gelded and we’re working on trailer loading. The biggest issue right now is his feet. He’s never been trimmed and now that he’s getting better nutrition, his feet are growing faster and he’s going to need a trim really soon. He has no idea about picking up his feet, but we’re working on it and he’s accepting it like everything else we’ve thrown at him. They called him Jeremiah but we re-named him Rusty.

I must now admit that I had an ulterior motive all along in getting a donkey. I want to train him to carry a pack and take him backpacking with me. I love backpacking and I’d like to do some backcountry trips way out in the boonies. I have dreams of hiking the Pinhoti Trail in Georgia and the Smokies in North Carolina. How fun would it be to bring my little donkey buddy? 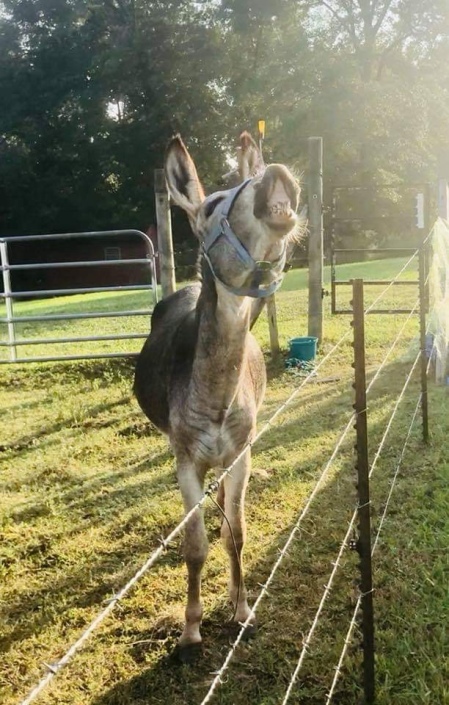 I could take my big horses, but it worries me to ride alone in the backcountry. If I take the donkey, I can hike alongside him and remove the issues that come from riding. I’m less likely to get hurt if I’m on my own two feet. He also eats waaaaaay less than the big horses so I wouldn’t need to haul as much food for him. He could carry the bulkier pieces of gear, like the tent.

He’s only two so he can’t carry weight yet, but in the next year he can learn how to carry an empty pack and start hiking with me to strengthen his legs. I’m excited about Project Pack Donkey. It’s a fun way to combine my interests in horses and the outdoors.

3 thoughts on “The $75 Craigslist Donkey”