I am a big believer in manners, for both people and horses. I recently acquired Olaf, a Belgian draft horse that is in need of some TLC. He had his first farrier visit a week and a half after I brought him home. To my horror, he was AWFUL. I can’t be blamed entirely because I haven’t had him long enough to fix the issue, but I am still mortified when my horses act up, in the same way that I’m mortified if my children are horrid in public (they typically aren’t because I raised them right). I think people ought to require that their children and their horses behave. 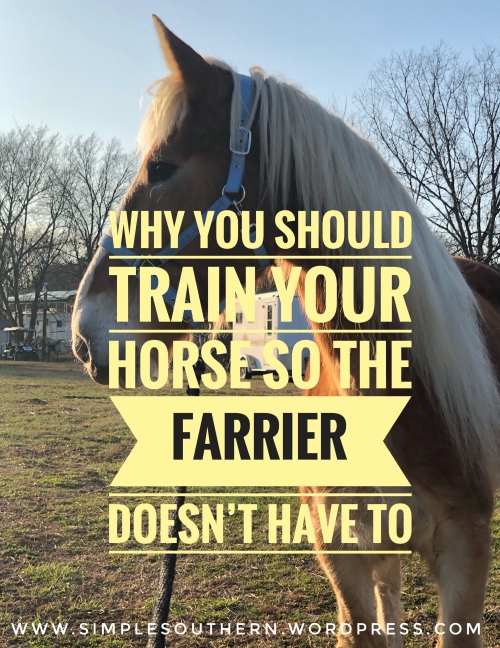 Olaf’s feet were really overgrown. I wish I had better pictures of them before the farrier came, but it’s hard to hold his giant hoof and the camera at once. I do maintenance trims on my own horses, but I’m useless in a situation where a hoof is this overgrown. It would take hours to rasp all that off, and I don’t even own nippers. I know when a professional is needed! 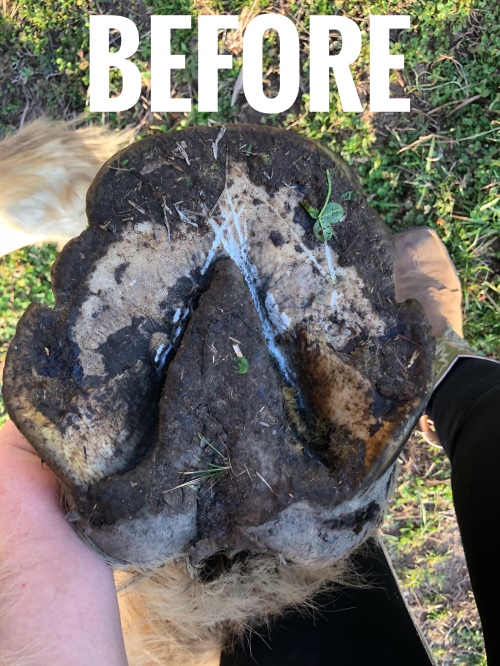 Unfortunately the only farrier that could come was only available while I was at work. It’s my friend’s farrier and she offered to hold Olaf while he got trimmed. I think she regretted that offer, but I paid her back in wine in hopes that she would forgive me. I also paid the farrier double, if that gives you any idea of what he had to put up with. 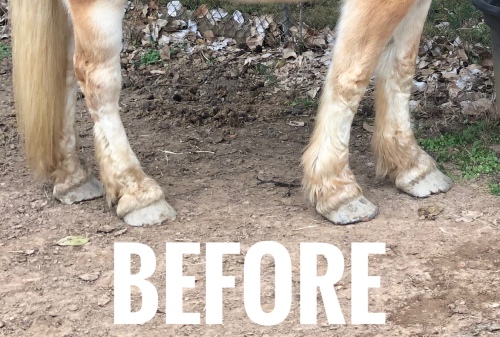 There are MANY farriers who flat out refuse to work on draft horses. The problem isn’t with the horses. It’s the owners who refuse to train them. A horse that weighs 1500 or 1800 lbs can do a lot of damage if he kicks you or knocks you down and steps on you. Drafts have huge, heavy feet (Olaf’s feet are the size of dinner plates) and, like every other horse, they sometimes try to lean on the farrier rather than hold their own weight. Being a farrier is already a dangerous, extremely physically demanding job, and no one needs it complicated by a giant, ill behaved horse.

From Day One of owning Olaf, I’ve been picking up his feet. He picks his back feet up with no problem, but getting a front hoof off the ground is tricky. I have to tap the fetlock joint with the hoof pick until he gets so annoyed that he lifts his foot. The goal is for him to lift them as easily as his hinds, with no tapping of the bone, but until he learns to pick his feet up I am happy to tap away. Picking up his feet is a non-negotiable. He IS going to pick up his feet and allow them to be trimmed and cleaned. Hoof health is a HUGE part of a horse’s overall health. It’s not something I can be lax about.

While he’s been a bit lazy, that was the worst of it with me. He never got pushy with me in the slightest. I had his teeth floated the week before and he was a little jumpy and pushy at first, but he calmed down really quickly and the dentist was able to work on him without a lot of trouble. I had no idea what a nightmare he would be for the farrier.

I wasn’t there and I don’t have any pictures, but my friend said Olaf didn’t want to hold his feet up for long enough to get anything done. Olaf is generally really agreeable and he did eventually submit to standing still enough to get some work done. It took a lot more effort than it should, however.

The real problem started when the farrier hit a big, nasty abscess. It hurt, and my friend said it was like they had hit Olaf with a cattle prod. After that, he was NOT NICE. He wasn’t kicking or trying to hurt anyone. He was trying to run away. He’s a big boy and when he tries to mow you over, there’s not a lot you can do about it. He was throwing his ample weight around and being very rude. Yes, he was in pain and he clearly has not been trained, but I’m only giving him a pass once. I was so impressed when I saw Olaf’s feet afterward. The farrier did a FABULOUS job at trimming off the excess hoof, especially when you consider what he had to put up with.

Someone else created the problem by failing to train him, but he’s mine now and I’ll be fixing it. Olaf is going to be picking up his feet and keeping them up. Every. Single. Day. I do not think it’s cute when horses, especially horses his size, act up. Olaf is about 200 lbs underweight right now. He’s only going to get bigger and stronger. This issue with his feet has to be corrected now. It’s not right for the farrier to put life and limb in danger because people are too lazy to train their horses.

Drafts are beautiful and I think a lot of people would like to own one in theory. But draft horses have all the problems of light horses, only on a bigger scale. The farrier visit was my initiation into the world of drafts and the challenges that go along with them.