It seems that fall temperatures may finally be upon us (thank the sweet baby Jesus), so this weekend we tried to use up what’s left of our garden.

The garden was not a smashing success by any means. A lot of my plants simply scorched in the intense, record breaking heat (97 degrees on October 3rd!). My herbs did all right though, so we used the herbs to do some canning. I was bound and determined that we were going to use something out of the garden this year. 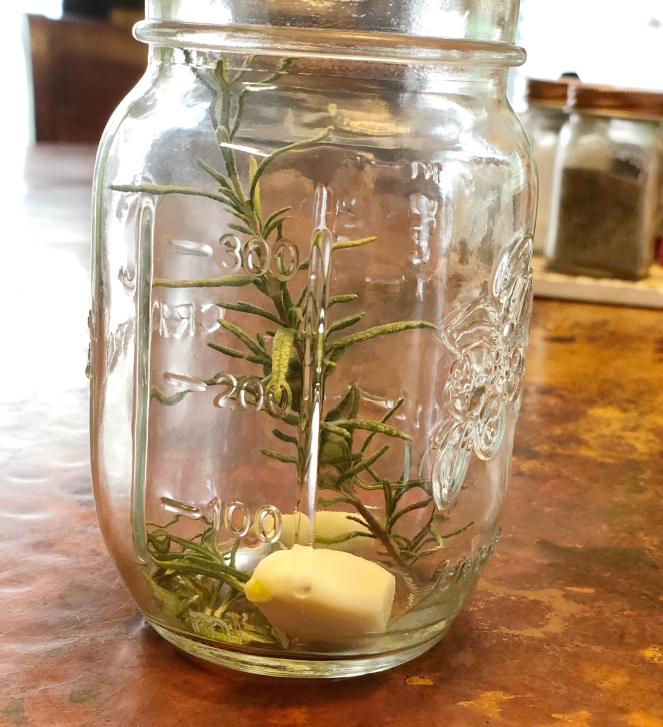 I had a library book that suggested some simple ways to use herbs, and one of them was making infused oils. We used rosemary, garlic and basil. It’s the easiest thing ever. You just put the herbs in a mason jar, pour in olive oil, and let it sit for about 3 weeks.

We also used store bought raspberries to make raspberry vinegar. (Also the easiest thing ever, just raspberries and white vinegar in a mason jar and let it sit.) Once it’s ready we’ll make our own raspberry vinaigrette.

We also used store bought cucumbers to make pickles. We used jalapenos from a friend’s garden to make some of them hot, so at least something in it came from someone’s garden.

They were refrigerator pickles, the kind you eat after just a day or two in the fridge. They were delicious! Someday I hope to make them with my own cucumbers and my own dill. For now, we’re making do with what we have.