State parks are open in my state, so my friend and I went camping. We chose a backcountry campsite at Sloppy Floyd State Park, thinking that would be an easy way to social distance and still be outdoors. 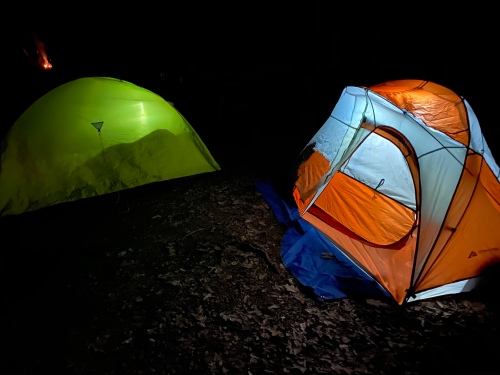 We were a bit disappointed by the campsites. There are 4 backcountry campsites situated on a little stream about a half mile hike from the parking lot. You would think since they’re called backcountry and you have to hike to them that they would be secluded. Not so much!

They are so close together you can hear conversation from the other campsites, hear them zipping up their sleeping bags and rolling over in their tents. So much for solitude! The sites are also situated right off of a heavily trafficked trail. They were no more secluded than the car campsites, which I found disappointing. I go backpacking to get away from people and incorrectly assumed that “backcountry” meant I would be in solitude.

On the plus side, the campsites are in a beautiful spot with a pretty stream and a tiny waterfall. They each have a grate and firepit and a picnic table. It was nice to be able to sit at the picnic table since we didn’t bring camp chairs. 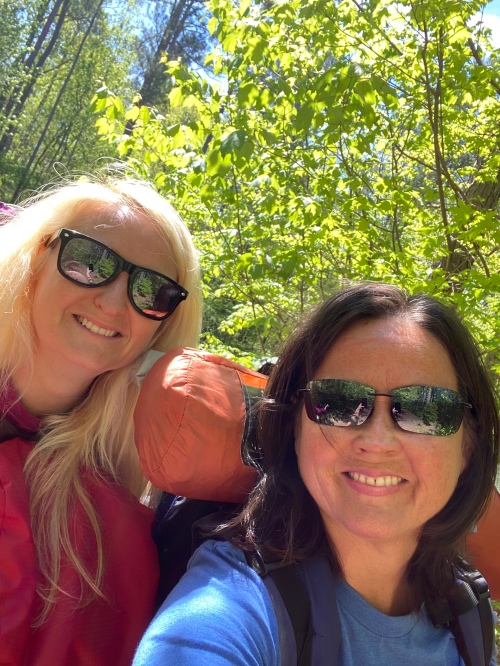 We hiked a short trail to the Marble Mine, which is an abandoned mine with a waterfall that dumps into a pool next to a cave. From there we hiked 1.7 miles to hit the Pinhoti Trail, which stretches from north Georgia all the way into Alabama. It is remote and not very well maintained in parts of Georgia, but it’s becoming more popular, especially with thru hikers. 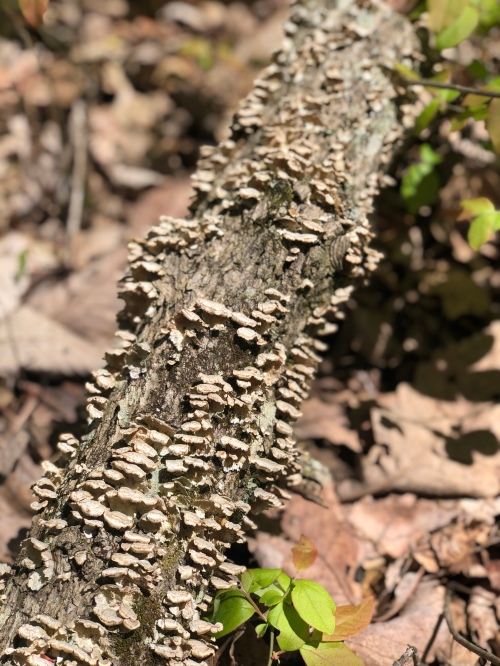 We met a mountain biker doing an 18 mile stretch of the Pinhoti. He is on the Board of Directors for the trail association and he has been organizing maintenance on the trail to clear downed trees and overhanging limbs. We had a nice chat with him. We told him we ride horses as well as hiking, and had done sections of the Pinhoti on horseback. Unlike many mountain bikers, he was happy that the trail is also open to equestrians. We had a nice talk about keeping the trail open to multiple users to encourage more people to get outside and care about maintaining the trail.

I’m actually pretty fond of the Pinhoti Trail. I’ve ridden my horse on a remote but beautiful section near an equestrian campground called Jack’s River Fields. Since it’s remote, that means it’s not heavily trafficked and not full of litter like some of the more popular trails in north Georgia.

This trip was especially fun because it’s the first time I’ve been able to convince my friend Karen to go backpacking instead of car camping. I am very much into ultralight backpacking and taking as little as possible in my pack. Karen brings her entire house every time we camp! This has become a running joke between us and our other friends because we’re constantly going back and forth about what qualifies as necessary. Most people side with Karen and say I want everyone to suffer!

Karen did pretty good for her first time camping without a car. I think she still brought way too much crap, but she pared it WAY down from what she usually brings. I was cracking up because she brought a full sized comforter and pillow.

We woke up to rain the morning we left and she ended up just strapping all her crap onto her pack and hitting the trail. It was hilarious. Her tent wasn’t even in the bag; it was trailing out behind her. I was cracking up. I can’t look at this picture without laughing out loud. I don’t know why I find it so funny, but I do. Maybe it’s because I read all this stuff about going ultralight and doing crazy stuff like cutting most of the handle off a toothbrush to save weight. Anyway, it’s hysterical. 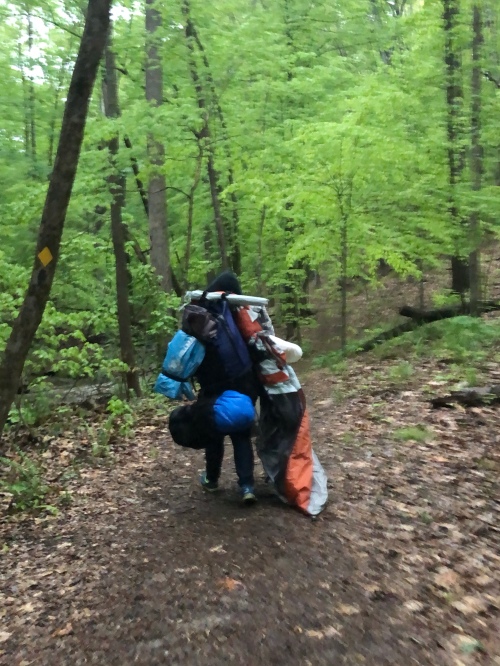